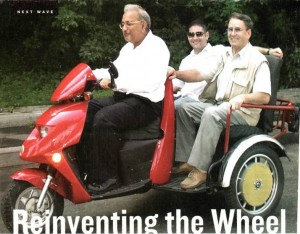 A Cold War-era idea for an electric motor is finally getting its road test.

Vasily Shkondin must have had a lot of free time when he commanded a Red Army radar station in East Germany back in the 1980s. Between shifts spent watching for the first blips of World War Three, he sketched out plans for a new kind of electric motor. The NATO bombers never did strike, but inspiration did.

Nearly two decades later, Mr. Shkondin’s idea for a thin electric motor is the flag¬ship product of Ultra Motor, a British company with designs on an emerging and undefined market that stretches from commuters in Zurich to rickshaw drivers in Calcutta.

The company’s motor—which is about the size of two dinner plates 4 centimeters apart—fits into the hub of any wheel, whether it’s attached to a bicvcle or a car. Ultra Motor plans to blanket the globe with fleets of electric bikes, motorcycles, motor-scooters, wheelchairs, and cars.

While hub-mounted electric motors aren’t new, Ultra Motor claims its design allows for much higher torque than conventional hub-type motors without the need for gears, belts, or chains, allowing it to match the performance of pricey com¬petitors at a fraction of the cost. «When it comes to daily travel within the world’s cities, vehicles powered by our motor will be all you need,» says Ultra Motor chief executive Paul Dyson.

A lot of money awaits Mr. Dyson if he’s right. The global market segment for two- and three-wheeled electric vehicles is expected to grow from $75 million in 2005 to $11 billion by 2015, according to Cambridge, U.K.-based IDTechEX, an independent market research and consultancy firm that monitors all types of electric vehicles.

Technology Limited and the U.K.’s Flintstone Technologies, a publicly traded incubator focused on Russian-originated technologies. The company now is looking to close an additional $4-million Series В fundraising in the coming months.

The future may be promising for electric vehicles, but the sector’s history is littered with the wrecks of reinvented wheels that never rolled. Remember the Segway? In 2001, veteran venture capitalist John Doerr, a Segway investor, described it as being potentially bigger than the Internet and predicted the company would be the fastest tech company ever to generate sales of $1 billion.

But the Segway ended up as a niche, rather than a mass-market, product. Price was a problem. Segways cost thousands of dollars, too much for most U.S. consumers and completely out of reach for the majority of the population in India